Back in the 12th century, French people started to play a game called “tenez”, the earliest version of today’s Tennis. Part of the Olympic Games, this sport has now become popular all over the world and it is played by people of all ages and skill levels.

There are a few game tools that are crucial to play tennis: rackets, balls, a net and a court.
The history of tennis balls goes back to over 700 years ago. Before the modern game of tennis, people used to play a game called Real Tennis, which used balls made of cork, fabric, and even animal intestines. 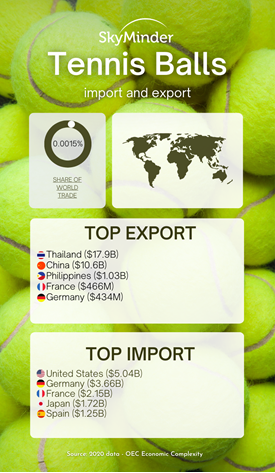 In the 1870s, rubber balls were introduced, and were eventually covered in flannel, which made playing better. During World War II, companies replaced rubber with reclaimed rubber and black seams, due to its shortage. It was in the 1972 that the traditional white balls were replaced with fluorescent yellow ones for better visibility on TV.

SkyMinder is the business information platform powered by CRIF, giving access to in-depth credit and financial data on companies all over the world. Thanks to our international presence and long-standing experience with local information providers, every country is available on SkyMinder, without data accessibility limits or updating issues. If you are evaluating the possibility of doing business with a company in this industry, SkyMinder can help you assess your potential partner.

Discover more about our solutions and don't hesitate to contact us!