Hungary: a look at the market

Located in the heart of Europe, Hungary shares borders with Austria, Croatia, Romania, Serbia, Slovakia, Slovenia, and Ukraine by land. The Hungarians called their homeland Magyarország, "Land of Magyars," and their history is unique and has deep roots.

From the year 1000 a.c., Hungary became a Christian monarchy and for several centuries acted as a barrier to Turkish development in Europe. Many centuries after, the country became a part of the Austro-Hungarian Empire, which collapsed at the end of World War I. The defeat in the First World War led Hungary to lose 71% of its territory, as a result of the Treaty of Trianon of 1920. In the aftermath of WWII, Hungary fell under the influence of the Soviet Union, and it became part of the Warsaw Pact countries. Communism in Hungary lasted until 1990 when it held its first multiparty elections and initiated a free market economy. It joined NATO in 1999 and the EU five years later.

The capital of Hungary is Budapest, a popular tourist destination and a vivid cultural, economic, and political center. Despite being a landlocked nation, Hungary has the biggest lake in Central Europe, the famed Lake Balaton, sometimes known as the "Hungarian Sea." Swimmers visit Lake Balaton in the summer and winter sports enthusiasts in the winter, making it a perfect holiday destination all year round.

The Economy of Hungary 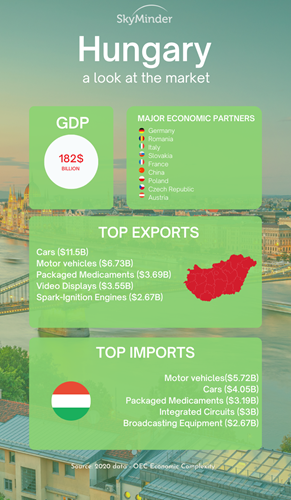 Hungary’s GDP was estimated at a total of $182.28 billion in 2021. According to the Social Progress Index 2021 (published every year by the Social Progress Imperative, a non-profit organization that ranks countries according to social aspects such as access to basic human needs, general well-being, and opportunities), Hungary is the 42nd country in the world for living standards.

In 2020, industrial (23.5%), wholesale and retail commerce, transportation, lodging, and food services (17.7%), and public administration, defense, education, human health, and social work activities (17.5%) were Hungary's most significant economic sectors. The majority of Hungary's imports and exports are traded inside the European Union: 78% of total exports and 71% of imports are intra-EU. Outside the European Union, its major economic partners are China, the United States, and the United Kingdom.

SkyMinder is the Business Information platform powered by CRIF, giving access to in-depth credit and financial data on companies all over the world. Thanks to our international presence and long-standing experience with local information providers, every Country is available on SkyMinder, without data accessibility limits or updating issues. If you are evaluating the possibility of doing business with a company located in Hungary, SkyMinder can help you assess your potential partner. Discover more about our solutions and don't hesitate to contact us!