Georgia: a look at the market

Located between East Europe and West Asia, Georgia is one of the four Caucasus nations, along with Russia, Armenia, and Azerbaijan.

Modern Georgia lies in areas that were once located in the ancient kingdoms of Colchis and Kartli-Iberia (15th century BC). In the early centuries A.D., the area was influenced by the Romans, and Christianity became the state religion in the 330s. In the 19th century, the country falls under the influence of the Russian Empire and in 1921 it was incorporated into the Soviet Union. Georgia finally gained independence in 1991 when the Soviet Union dissolved. The country shares borders with Armenia, Azerbaijan, Russia, and Turkey by land and with Ukraine by sea. Its climate is warm and pleasant, Mediterranean-like in the Black-sea cost.

THE ECONOMY OF GEORGIA

Its main economic activities include agriculture (grapes, citrus fruits, and hazelnuts), mining (manganese, copper, and gold), and producing alcoholic and nonalcoholic beverages. Georgia is one of the oldest wine-producing countries in the world.  From being totally dependent on Russian gas, Georgia was able to obtain more independence in the energetic sector by improving imports from Azerbaijan. In the past, the ties with Russian gas caused chronic energy shortages and gas supply interruptions.

In 2006-07, thanks to strong inflows of foreign investment and robust government spending Georgia's GDP growth of more than 10%. The growth stops in 2008 after the global recession and the Russian invasion of South Ossetia territory.

The country’s GDP in 2021 was a total of 18.7 billion dollars. After losing a -6.8% in 2020, the country was able to grow by 10.4% in 2021.  It is the 122nd country in the world for GDP size. According to the Social Progress Index 2021 (published every year by the Social Progress Imperative, a no-profit organization that ranks countries according to social aspects such as access to basic human needs, general well-being, and opportunities), Georgia is the 49th country in the world for living standards.

In order to attract foreign investment and boost employment, the country is pinning its hopes for faster growth on a continued effort to build infrastructure, improve support for entrepreneurship, simplify regulations, and improve professional education, with a focus on transportation projects, and tourism, hydropower, and agriculture.

Georgia signed an association agreement with the EU in mid-2014, clearing the path for open commerce and visa-free travel. The country also signed a Free Trade Agreement (FTA) with China in 2017 as part of its attempts to diversify its economic connections. Georgia is looking to expand its Black Sea ports in order to ease East-West commerce. 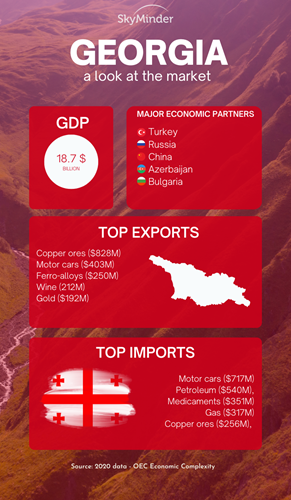 SkyMinder is the Business Information platform powered by CRIF, giving access to in-depth credit and financial data on companies all over the world. Thanks to our international presence and long-standing experience with local information providers, every Country is available on SkyMinder, without data accessibility limits or updating issues. If you are evaluating the possibility of doing business with a company located in Georgia, SkyMinder can help you assess your potential partner. Discover more about our solutions and don't hesitate to contact us!