Estonia: a quick look at the market

By SkyMinder Marketing Team May 10th 2022

Estonia is a country located in the northeast of the European continent and along with Latvia and Lithuania, it is one of the three Baltic countries. It gained independence in 1918, but it didn't last long. In 1940, the Soviet Union invaded the country, and its dominium lasted until the 90s, when it gained independence again. In 2004, the country joined the European Union and NATO. It has a thriving and modern economy and a population of 1.2 million people. 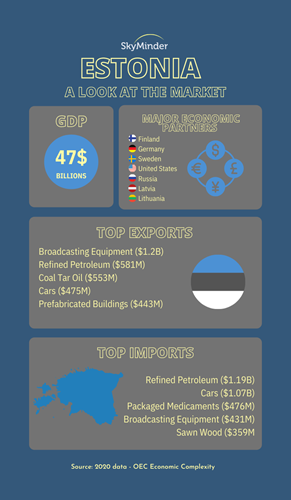 In Soviet times, the small republic was a major industrial hub. Although industry and agriculture continue to play an important role in national health, the service industry and foreign trade are the main contributors to Estonia's GDP, estimated at 47 billion dollars in 2020. Important sectors are wholesale and retail trade, transportation, and hotel and restaurant services (20.5%), industry (19.2%), and public administration, defense, education, health, and social assistance (16.7%). Since the country's accession to the EU, the country has experienced significant growth, and the capital, Tallinn, is home to many businesses. In nearly two decades, it has attracted many foreign investors thanks to a business-friendly fiscal system.

Are you evaluating the possibility of doing business with a company located in Estonia? When looking for a new supplier, customer, or partner, it is important to find reliable information about the business. SkyMinder can help you assess your potential partner. Discover more about our solutions and don't hesitate to contact us!